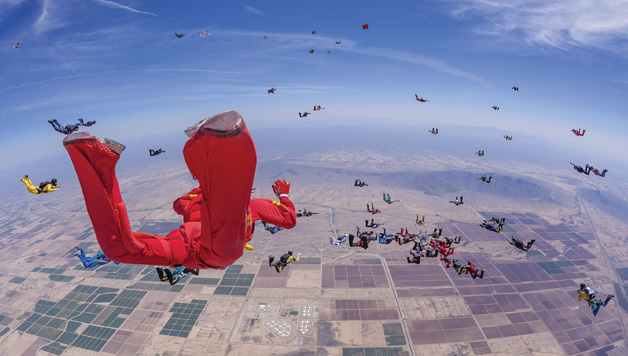 One time, my wife, then my fiancée, thought she would surprise me by taking me skydiving for the first time on my birthday. She had jumped three times and was going to try to scare me. I didn’t know the first thing about jumping, and she wanted to see me get scared. Was I scared? Of course I was!

I told myself, getting overwhelmed won’t open your parachute. The hardest part of the day was the ascent in the plane to 10,000 feet, anticipating the leap to my possible death. The list of all the things that could go wrong filled my mind during that 20-minute flight, but I kept telling myself, The more you do that which you fear, the more courageous you become.

I’d encourage you to start each day by asking yourself, “Who or what do I most fear today?”

The great thing about fear is that it isn’t real. I know when you are experiencing fear, it may feel quite real; but it actually does not exist in the physical universe. This unseen, intangible factor called fear does so much to motivate some, yet it also immobilizes millions of people every day from taking the actions they need to take.

The way to kill fear is by taking action. There’s nothing like a flurry of action to absolutely extinguish that monster called fear. I use fear every day as my inspiration, as an indicator of those things I have to confront. The more you practice moving in the direction of that which you fear, the more it becomes a habit – second nature, in fact.

I’d encourage you to start each day by asking yourself, “Who or what do I most fear today?” The answer to that question should give you direction in which to move. Taking action on those things you fear is how you build courage.

Courage is just an exercise in action, it’s only a trait. Everyone has the ability to be courageous; you just have to take action. Overcoming your fears allows you to increase confidence in yourself and take your career to another level. Remember that handling fear is merely a decision. Personally, I refuse to let fear master me.

Think about it. Who wants to do business with or support someone who readily gives in to his or her fears? Who wants to invest in a project when the people behind it don’t act with confidence and courage? People often ask me, “Does nothing scare you?” I experience fear, but I also exercise courage. Courage isn’t the absence of fear, but an urgent impulse to do something despite fear.

As I watched my then fiancée fly through the sky, I had to make a decision. My girl jumped; what was I going to do, NOT jump? I took action – I jumped. Seek to be scared until you have to push yourself to new levels to experience fear again.

To get rich, you have to push yourself to do things you may not want to do; but later, you’ll laugh at how silly you were for being so fearful of such a small thing.