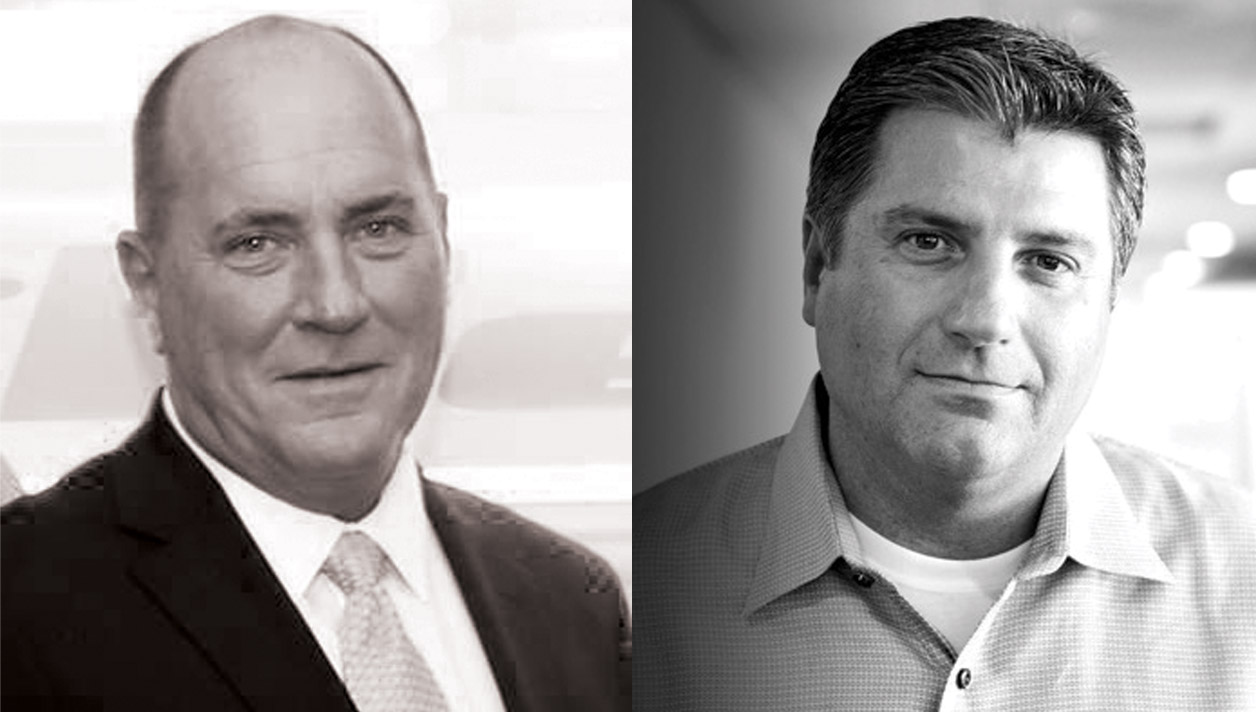 Following our features on service tech veterans this summer, let’s shift to equipment sales – and two of the industry’s best. Paul Manke and Eric Haynes go back in the tan biz nearly as far as the first U.S. sunbeds. I’ve had the pleasure of working with both of them, and you’d be hard-pressed to find two more professional than these guys. PC Tan Founder/CEO, Susan Miller, really picked a couple of winners with Paul and Eric.

What’s interesting is that they both have executive positions at PC Tan and work extremely well together. It would be natural (or, so I thought) to note some competitiveness … you know, “only one rooster in the hen house.” But, that’s far from the truth. I hope you enjoy my interview with this dynamic duo.

IST: You guys have been around since the early 80s. Let’s start off with the standard background question: how did you get your start in the industry?

Eric: After graduating from college in 1982, my uncle and his brother – Bill and Porter Hurt – were kind enough to give me a job opportunity with their three-year-old company, Sun Industries. For the first couple of years, they manufactured wooden-framed home and commercial tanning units under the name of SunTana. When I joined them in September of 1982, they were making beds with welded metal frames. Sun Industries went from manufacturing hundreds of units in 1982 to 15,000 in 1985 as the indoor tanning industry exploded! In 1999, Sun Industries became Sun Ergoline. I worked there until 2002.

Paul: Joe, I got started in 1983 by opening a store offering four 24-lamp sunbeds, and from the relationship I had with my bed supplier (Great Tan in Sioux Falls, SD) they offered me a job selling equipment. So, along with opening and running my four-bed store, I was out cold-calling on beauty salons, health clubs and racquet ball clubs. Tanning salons, at this point, were non-existent. I grew my position with Great Tan along with opening a second tanning studio (which is what I named them). I worked with Great Tan until around 1989, while also tending full-time to my four-store Tanning Studio chain.
IST: An interesting start for both. When I was National Sales Director at Wolff System Technology Corp., the Great Tan and Sun Industries were my accounts!

So, let’s move on. Describe your current roles with PC Tan. As I mentioned, I think it’s interesting that you two – with your work experience – have coexisted for quite a while at PC Tan. Please elaborate on how you “make it happen.”

Paul: I joined PC Tan in 1997, moving from Minneapolis, Minnesota, after severing ties with my partner in six salons there. But I knew I wanted to stay in the tanning industry, as I loved it so much and still do. Through Great Tan, I knew Susan Miller, and we always spoke at industry trade shows. I again ran into her at a Chicago trade event in November, 1997. We had breakfast the first morning of the show and talked about the opportunity she had at PC Tan for me. I officially joined PC Tan on November 17, 1997. Working closely with Susan and her team, we grew the uwe product line to be one of the industry’s most well-known and demanded German sunbed lines. As our sales grew, there was always room for other great leaders from the industry. Eric joined PC Tan in 2005 as the second VP of Sales. I had always known Eric from the industry and knew he came to PC with not only a great following of happy customers, but also was a man of integrity. We all knew at PC Tan he was going to be a great asset to our team. Eric and I work extremely well together and many times, bounce ideas off each other or maybe just confirm our thinking. Eric is great to work with and I cannot imagine a better colleague.
IST: So, Paul, it was perhaps a serendipitous moment back in 1997. How about you, Eric?

Eric: In 2003, I was fortunate to join the great team at Four Seasons Sales & Service, who was distributing equipment for PC Marketing. This allowed me to get to know Susan Miller and Paul, her head of sales. In 2005, I jumped at the opportunity to join PC Marketing as Susan’s second VP of Sales. Susan, Paul and I have always worked closely together on sales and have never competed. In fact, I often lean on Paul for his expert input. We’ve always supported each other and both want what is best for our customers, the company and the incredible team we work with. PC Tan is blessed to be loaded with long-term industry professionals who are also great people – starting at the top with Susan. A third of our team members have 30+ years in the industry; a third has 20+ years; and the majority of the rest have 10+ years. And everyone has a ‘whatever it takes’ attitude in taking care of the customer and contributing to the company.
IST: Great team story there! An interesting footnote that I also worked for Susan Miller back in the halcyon early days of indoor tanning with a company called SCA Wolff System.
IST: Alright, let’s switch gears a bit. Paul, you’re a Minnesota guy. Eric, you’ve got some Louisiana roots. What’s the biggest adaptation you’ve had to make with PC Tan being in New Jersey? Have you changed sports team affiliations? What are your fave pro or college teams?

Eric: The PC Tan corporate office is located in New Jersey and about half of our team members are located there. The other half are in our primary distribution center in Alabama and in remote offices in Alabama, Florida and Minnesota. When I started with PC Tan, I worked from a remote office in Arkansas. Our family then moved to Alabama and I worked at the facility there. I now work from a remote office in Virginia Beach. My favorite college football and baseball teams are still the LSU Fighting Tigers and the New Orleans Saints are still my favorite NFL team.
IST: Back to you, Paul.

Paul: Wow … great question! The biggest adaptation for me with New Jersey was the cost of living. When I first moved here, I wouldn’t even share with family or friends what it cost to just live in an apartment – I thought they’d think I was crazy! Over the years, you become accustomed to your environment and learn to live within it. While I grew up a Twins fan, it’s hard not to be swayed while living here to become a Yankee fan.
IST: As you’re both involved with sales, how has the industry changed over the last ten years regarding the demands and needs of the salon owner?

Eric: Ten years ago, the U.S. economy was trending from strong and robust to a looming disaster in the housing and financial sectors – this impacted world markets and threatened to plunge the economy into recession. All salon owners have had to work harder and smarter to keep their businesses alive and well. But the tanning industry did not corner that market of difficulty. The challenges of the economy over the last ten years has affected most businesses – large and small. In fact, many salon owners tell me that they wish their other businesses were doing as well as their tanning salons.

Paul: Adding to that, the numbers are real: since 2008, the number of salons has fallen from around 18,000 to a little less than 8,000. Just as there are fewer salons, there are also fewer suppliers/distributors to service them. PC Tan works hard to provide our customers with the support they need and deserve.
IST: It’s obvious that customer service has had a huge impact on your success at PC Tan. But there have always been roadblocks to selling indoor tanning. The weather, seasonality, the economy, discretionary income, fuel prices, negative media and more. Moving forward, what do you feel are the biggest obstacles currently facing the industry?

Eric: Really, one of the biggest obstacles we are battling is the perception that sunbed use has been given. The public continues to be told that using a sunbed is dangerous. I believe that if you want a tan, using a sunbed with a controlled UV output is the best way to do it. That’s why they are called tanning salons … NOT burning salons. UV exposure is not the problem; overexposure is the problem. Overexposure happens all the time in uncontrolled environments. Tanning salons are controlled environments.

Paul: The point of tanning in a salon is to develop a tan without overexposure. Telling the public to avoid the sun is not good, either. Underexposure or lack of UV stimulation for our body carries with it many serious health related issues. Moderation is the key – just as it is with so many things in our daily lives.
IST: Amen to that! Okay, you’ve both sold different types of equipment. Remember the days of UVA beds vs. UVA/UVB beds? Bed and lamp technology has dramatically changed since you got in. Of course, without revealing proprietary technology, what does the ‘bed of tomorrow’ look like? A 30-second session? What additional features?

Paul: We have the great privilege of distributing the KBL equipment line for North America and Mexico. KBL’s technology is incredible and unmatched, in our humble opinions. KBL has had aroma and changing-LED illumination in their tanning units for about seven years now.

Eric: I had to chuckle three years ago when I saw an ad on TV for a new Mercedes-Benz that was introducing aroma and changing-LED lighting in the passenger compartment. Hey, we had already accomplished that in our sunbeds! In that case, the tanning industry seemed to be leading the automotive industry.

Paul: I personally don’t see the session times getting shorter. I feel like KBL will couple their great tanning performance with the latest in computer technology to give the tanner the ultimate experience, in addition to a great looking tan from the bed of tomorrow.
IST: The industry is going on 40 years of existence. What is critical to its reaching the 50-year mark?

Eric: I can’t imagine the tanning industry not being around for years and years to come. Every year, it becomes more and more professional.

Paul: I look forward to the day that the majority of the people going to a ‘sun spa’ are there for the benefits of moderate UV exposure, and they like the color that they get as a side benefit!
Gentlemen, that’s a wrap. Thanks for taking time out of your busy schedules to catch up, and we wish you both continued success! ν

“Everyone on our team has a ‘whatever it takes’ attitude in taking care of the customer and contributing to the company.”
— Eric Haynes

“Eric and I work extremely well together. I cannot imagine a better colleague.”
— Paul Manke